There have been lots of studies about birth order and the traits that you inherit, simply by being born before or after your siblings. Sometimes I wonder how my life could have been different if I hadn't  been the older sister.

When I was younger, I used to be angry that I had to be the oldest. I hated that I always had to go through everything first and be the "role model" for my siblings. I hated feeling like I had to make all of the mistakes that my siblings could learn from.


At the same time, though, I have always loved the attention I got from being the oldest. Not only was I my parents' first child, I was my maternal grandparents' first grandchild. Being the first was fun. People got excited about everything I did. My parents told me things they didn't tell my siblings.

Through the years, I got to be the proud older sister as my brother was one of the best divers in the state, went on to dive in college, and went into the Navy (this was us at his bootcamp graduation).

And just like my sister said on my birthday, my mom and aunt were right. She and I did become friends. 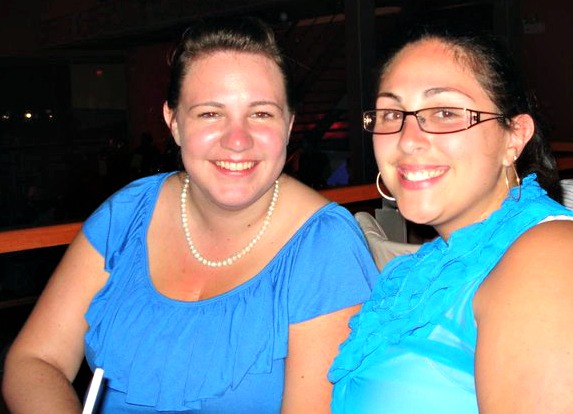 As different as we are in so many ways (it's hard to tell in this picture, but she has blue eyes and her hair and skin are much lighter than mine), we're also pretty similar (yes we came to a bar wearing almost the same exact color/type of shirt). Our husbands always comment about how similarly we talk, how we make the same hand motions, and how we act. And yes, my parents were right. My sister copied me all the time because she wanted to be like me (and she still does!). Haha she's going to kill me for writing this. 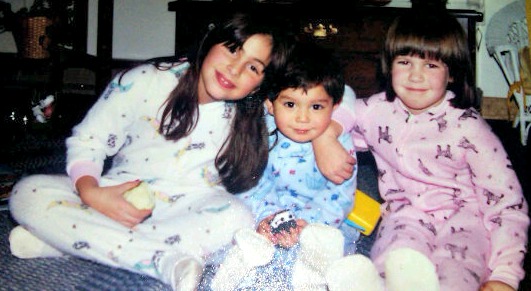 Through the mullets (see what I mean about mistakes that my siblings learned from?), bowl cuts, and footie pajamas, being the oldest has meant getting to be the leader. Getting to boss them around. Getting to dress my brother up like Rainbow Brite (remember, Meegs??). Being old enough to know that if I played my cards right, I could get my sister to give me some of her birthday presents. Thanks for the purple plastic horse, Em!

Researchers who study birth order often talk about the first born having the toughest job of all siblings. They even say that sometimes oldest children wait for "permission" to be a kid because of all of the responsibility that comes with being the oldest. Even though I believe both of these statements to be true, I wouldn't change my position. I've learned so much by being the oldest. I've gotten to share so much. And I've gotten to make my own way.
Posted by Empirically Erin at 7:00 AM

I'm the oldest too! I can totally relate. In the end its taught me a lot about leadership. What bugged me the most growing up was that my mom was the strictest with me. I think that comes from her being a new first time mom and being extra careful. My siblings could do so much more than I could cause by the third kid she was just like, " oh they'll be fine!" Haha

I'm the youngest by 12 years! So in a sense I had 4 extra parents lol. My siblings took so much care of me.

If you had been born second, you'd be me. And let's face, no one is better being me than me!

Also, the purple horse incident (which I have no actual memory of) most likely attests more to my generous spirit and your selfish heart than it does to my young naivete.

Hmph. My birthday is coming up and no, I will not share my gifts.

Such a good looking family!!

Such a good looking family!!