Somehow I am already 25 weeks along. How is this possible?! Every day I am getting more and more anxious about this baby coming... in good ways and bad. There are days that I can't contain my excitement about meeting this little person who is half me, half LoLo. Then there are other days when I can't seem to keep my eyes open and I think to myself, "I had 10 hours of sleep last night and this is how I feel?? How will I feel with 2 hours??"

Still, things are moving along and I am feeling good. I passed my glucose tolerance test. My belly has gotten rounder. My parents gave me a mother-to-be card on mother's day.

And my favorite moment this week? LoLo finally felt the baby kick. And the baby kicked him in the face as he put his cheek up against my stomach. Now I really can't wait to meet this baby!

The picture isn't great, but it shows how I'm looking these days.

And because I think this is the cutest thing, my mother made a bouquet of mini cupcakes for mother's day and brought them to my aunt's house for our celebration. She is so cute and creative. 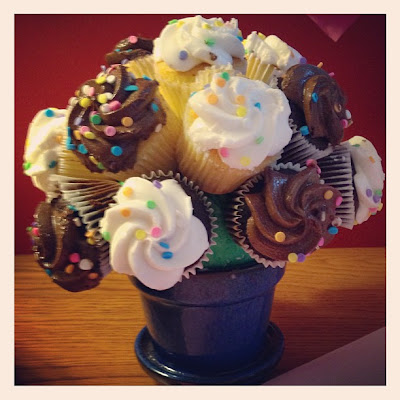 Posted by Empirically Erin at 7:00 AM 4 comments:

Last year, I didn't have quite so many readers, so I figured in honor of Cinco de Mayo which is coming up this weekend, I would re-post my post from last year.

Every year around this time, I know I'm going to have to cringe at the many people who are "dressed like Mexicans". Every year I'm annoyed by the fake mustaches, the sombreros, and the ponchos.

This year, before you "celebrate" Cinco de Mayo, read my post and think about how you want to celebrate.

(stepping down from my soap box now.... happy weekend!!!)

Erin's thoughts on Cinco de Mayo
Posted by Empirically Erin at 9:33 AM 1 comment:

Everyone has an opinion

Since I started telling people that I am pregnant, everyone suddenly has an opinion. I had heard that it happens and that suddenly people think they should/can tell you what they think about the little life growing inside of you, but I have to say I didn't expect people to be so blunt about their opinions.

In the past few weeks, now that it is more obvious that I am pregnant, several people have asked me what the sex of the baby is. When I tell them that we have decided to have a surprise, I've gotten some surprising responses. Several people have told me that that is "stupid" or "lame".


Really??? Did I ask what you thought about it? Do you really want to piss off a pregnant woman?

We have our reasons for wanting it to be a surprise. We didn't just decide that out of nowhere. It doesn't mean we don't care. It's also not up for discussion so your opinion isn't going to change our decision.

When it comes to pregnancy, I am relatively conservative. I don't want to know the sex until the day I meet the baby. I don't want to name the baby until I see him/her. I don't want to share our ideas for names with people either because, well, people love expressing their opinions about name choices too.

At the same time though, if another couple wants to find out the sex of their baby and name the baby the day they find out and tell everyone the name, that's their choice. I wouldn't make that choice, but that doesn't mean it isn't right for them. Or that it's "stupid" or "lame".

What is it about pregnancy (and, my friend pointed out, weddings) that makes people think they can freely share their negative opinions about your choices?
Posted by Empirically Erin at 7:00 AM 5 comments: