Yesterday, my new co-worker told me a story about how he and his wife, who is over 8 months pregnant, have been living in separate countries for several months due to circumstances they could not control. The job he accepted with our company happens to be sending him to the country where his wife is currently living, about 3 weeks before their first child is to be born.

When he told me this story, all I could think of was "Everything happens for a reason". The job became available right when he was desperate to find a way to get to his wife. Things like this don't happen by accident.

I'm not a hugely religious person, which is no surprise to those who know me. I was raised Catholic, but after high school, I found myself going to church much less frequently. But I will be the first to admit, there is a bigger power out there.

I don't know the answers to these questions, but one thing I do know is that with every struggle I have gone through, eventually, I have been able to see why it had to happen. Sometimes it takes years before I see the reason, sometimes much less, but I always end up understanding. And because of this, I know there is someone looking out for me. Maybe it's my grandfather. Or my Auntie Evie. Or my Uncle Mike or my cousin Julie (they were both tricksters!). Whoever it is, I know they are making sure that from every struggle, I learn.

Regardless of your religious beliefs, it's hard to deny that there are many happy accidents that have no clear explanation. Whether that happy accident is making it back to your wife just before she gives birth to your beautiful new child or heading in the opposite direction from a major terrorist attack or getting delayed on your walk just long enough to run into an old friend, serendipity is truly the work of something much greater than us.

And because I want to end this post on a funny note, this quote: 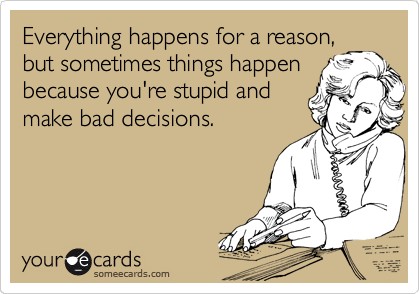 Posted by Empirically Erin at 7:00 AM

I hope to try Serendipity while in Vegas! And I really like this post. I too have been through struggles and years later I looked back and thought, you know if that wouldn't of happened this wouldn't be happening now. So I am a firm believer of, everything happens for a reason!

I agree with you (and Sandra there) ... everything happens for a reason. love this post (you are such a great writer). oh and I'll take the 10,000 calorie Serendipity also. maybe we could share it? Nah.

Amen Erin. I have such a hard time remembering this in times of pain or when things just aren't going my way. . . and if i stay with it I always find a reason why things "are". I loved this post, and I LOVE your new look and blog photo!

I got chills reading that LoLo was meant to be in Lower Manhattan on 9/11. Thank God he wasn't. I'm a big believer in everything happening for a reason also!