Today, we were rebels

At my job, we get 2 winter Fridays off and 4 summer Fridays off. Since I started in April, I got to take 1 of my winter Fridays and I chose today. Here in Maine, it's been raining for the past two weeks minus one or two days. Today it is in the 70s and sunny.

We started off the day with lots of sunshine coming through our windows. Our bedroom is two shades of bright blue. It's perfect for a bedroom because how can you wake up in the morning with sun shining off bright, happy, blue walls and feel upset? 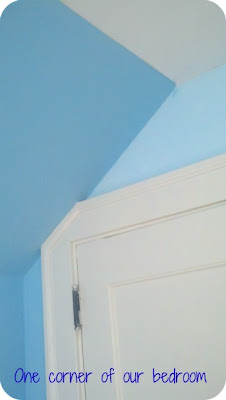 Today is my aunt/Godmother's birthday so I ran over to the mall to get her gift. She is so easy to buy for because she has such a distinct style. So of course, as soon as I got to the mall, I found exactly what I wanted to buy her...in less than 10 minutes. That seemed like such a waste of a good trip to the mall. So obviously I had to head over to the plus size section to look for clothes for myself! And look at this rare gem I came home with: 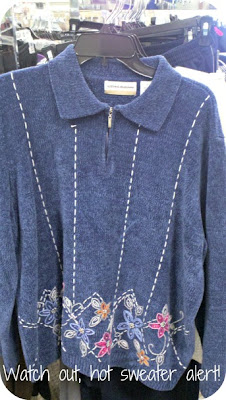 And who could have designed this runway hit? You guessed it.

None other than your boy, Alfred Dunner.

Hahaha, let me stop. You all know I didn't buy that piece of garbage. But I saw a grandma checking it out like it was the "it" sweater of the year. But now do you see what I mean? Just because I'm big doesn't mean I'm not stylish.

Funny sidenote, someone searched "Alfred Dunner" on google and came across my blog. For some reason, I doubt they are now following me.

After lunch, I made LoLo take me to get an ice cream cone (I mean, obvi). While we were there, Bronxy was pretty thirsty. Either that or he was trying to tell me he wanted an ice cream too (he is my dog after all). We didn't have his little water bottle with us so of course, my husband aka McGyver, made him one. Another funny sidenote (fsn if you will), when McGyver is dubbed into Spanish, they pronounce McGyver "Ma-GEE-vair" which I think is hilarious.

I told you. This man can do anything. He also fixed our basement door this morning using power tools. I know, amazing. And no, I didn't body slam that door like I did the other one he fixed (cuz I know you were wondering).

He also took a picture with me that I think you all will love...but that's going to be in another post. (See what I did there? I hooked you so you HAVE to come back) Let's just say there are Mariachi suits, guitars, and trumpets involved. Oh yeah, it's worth coming back for.

So don't tell anyone, especially LoLo's supervisor "Yudy" (that's Judy in Spanglish for those who are unfamiliar with the language), but LoLo and I had a really nice day even though he was "sick" (cough, cough).


Posted by Empirically Erin at 9:00 AM

I have a Mexican friend & his favorite show is Judge Judy, yet he pronounces it Yudge Yudy, it's so cute!! =)-Meegs

I'm with thecoffeehouse up there- I totally would have followed you too!!