Lessons from One Month of Employment

Now that I've been employed for almost a full month, I thought I would share with you some of the things I've learned since becoming gainfully employed.

1.) Hide yo' kids, hide yo' wife! Dishes have learned to reproduce! In the month since I got my job, every time I come home, there is a sink full of dishes...even though I swear I just washed them the day before!

2.) Someone is coming into my house during the day and setting a bomb off which consequently leaves clothes strewn all over my bedroom and mail, books, and other things strewn all over my living room. This is the only possible conclusion I can draw about the state of my house.

3.) Life before 8 am actually isn't horrible, but I still prefer a later wake-up call.

5.) Weekends are still too short.

6.) There is a lot more laundry to do when you are employed. It's one thing to wear the same outfit two days in a row in front of your puppy, it's a totally different story when you actually have to see people.


7.) It's really easy to slip back into old habits. For example: LoLo and I were basically going out for dinner once or twice a month when I was unemployed. In the weeks since I've been employed, we've been going once or twice a week.

8.) There is not enough time in the week to watch all of the shows I DVR (apparently DVR is a verb now) unless I sit in front of the television all weekend.

9.) Bronx is just fine without me being home all day. He has a bff at Doggie Daycare named Brutus. If I told you there were two dogs named Bronx and Brutus, would you ever guess they were tiny yorkies? 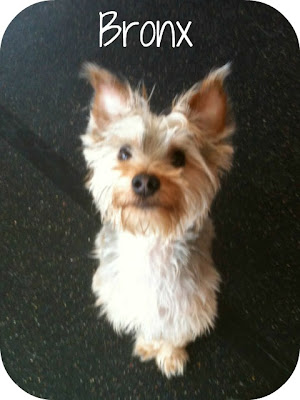 10.) I was wrong about not being ready to go back to work. The supervisors I've worked with have been really impressed with how I work. They are loving my organizational skills. My transition has been relatively easy.

Yay for almost working for a whole month! I think this is the start of a wonderful thing!

p.s. Happy 85th birthday to my Noni! Even though she'll probably never read this, I want the world to know how much I love her and hope she enjoys her day!
Posted by Empirically Erin at 7:00 AM

That is wonderful that your new job is so working out so well. I hope I have an easy transition back to working FT when we head back to the states in a few months. I am dreading it & scheming ways to get out of it!

Bronx and Brutus are ADORABLE! And the irony of their names is great! And I'm with you - I prefer a later wake up call, but pre-8 am isn't so bad...

Bronx and Brutus are ADORABLE! And the irony of their names is great! And I'm with you - I prefer a later wake up call, but pre-8 am isn't so bad...