Yesterday, my family celebrated my grandparents' 60th wedding anniversary. 60 years!! Can you imagine?? I know I can't. I've been alive almost 30 years...and they've been married twice that long. When LoLo and I got married, my sister made an incredible toast. In that toast, she talked all about how in our family, there are a lot of examples of good, solid, loving marriages. She attributed these successful marriages to many things, but most of all, to laughter. See, in our family, there is a pattern. Strong woman married to often times quiet, yet hilarious man.

When my grandparents met, my grandfather was a medical doctor from Mexico doing his residency at a hospital in Boston and my grandmother was a registered nurse at that very same hospital. They moved back and forth from Mexico to the US several times before they finally settled down in Maine. They had three children, including my mother.

Much like LoLo, when you first meet my grandfather, he is a quiet man. But once he's comfortable, you better be ready to laugh. My mom always told us that his humor was kind of a Hispanic humor and now that I am married to a Dominican, I totally know what she meant. I don't know how to describe it, but he's so quick to come up with something funny to say about any situation and I don't know, there's something about an accent that helps to make almost anything funny to me. 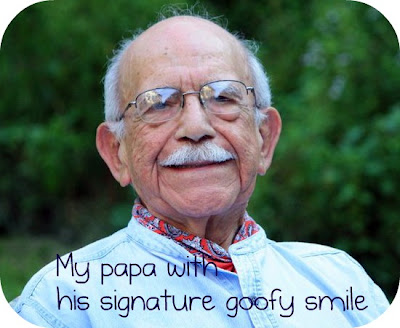 Thanks for the pic, Aunt Marta!

Just yesterday, I had lunch at my grandparents' house and they gave me a perfect example of the humor I'm talking about. My grandmother was telling me that 60 years ago when they met she had nicer hair and teeth and beautiful hands. Then my grandfather said, "yes, my little girl had nice hair, nice skin, and nice hands...and she was nice!" To which my grandmother said, "Yeah well at least I have hair now!" and walked away. 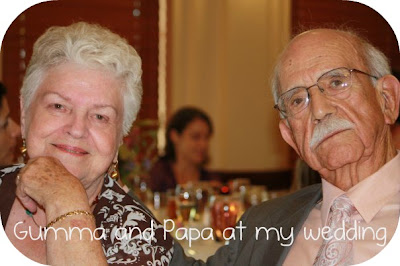 Thanks again, Aunt Marta, for the pic!

When I look at my grandparents, I see my future. Me and LoLo, fighting about tiny things (like who our son's first doctor was in Mexico...please never bring this up in front of my grandparents), but then laughing together 5 minutes later. Me and LoLo, sitting in our recliners, watching tv together (well really, he'll be sleeping and I'll be stuck watching whatever's on since he has the remote). Me and LoLo, taking care of each other.


Today, LoLo and I were cleaning up the kitchen. I was washing dishes and he was taking on the more dirty work like cleaning the stove. LoLo is a very handy and artsy person, but he hates getting his hands dirty. We almost always have at least one box of surgical gloves in the house, but we recently ran out. Luckily though, LoLo had an emergency stash which he told me was in a place I would never believe. He ran down to the basement and came back up holding his car keys. On his car keys, he has a mini converse sneaker keychain with a Dominican flag on it. He untied the sneaker and reached in and pulled out two rubber gloves. Who does that?! Well according to LoLo, "You never know when you might be in a crime where you don't want to leave fingerprints."

For anyone who knows my husband, you know that the chances of him being involved in a crime where you wouldn't want your fingerprints (or any crime really) are very slim to none. But I laughed for at least 5 minutes at that.

And that's how I know me and LoLo could make it to our 60th anniversary. Because we have some very good role models and lots of laughs just like them. If we can stay on the same path as my grandparents, I think we will be just fine.
Posted by Empirically Erin at 1:03 PM