It's a Girl!! The birth story

Most of you have heard by now that I had my baby. Alexia Lidia Santana was born on Saturday, August 17 at 2:32pm, ten days before her due date. She was 8 pounds, 15 ounces and 21 inches long. LoLo and I are so happy and love her so much already! 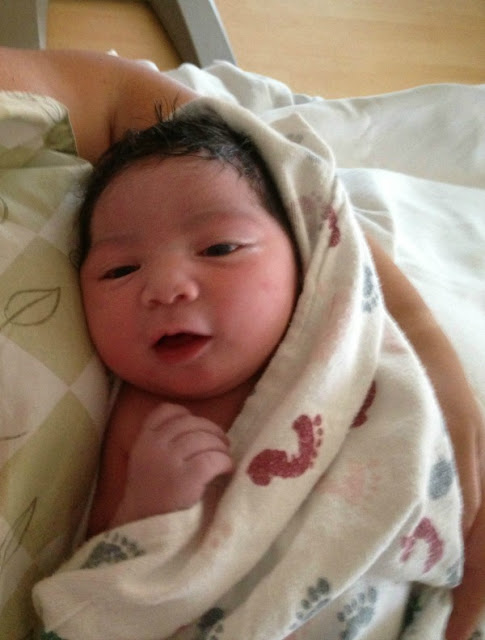 It all started Friday evening when I got home from work around 6:20. As I was driving home, I called my mom like I always do. When I stepped out of the car, I told her "Ummm, Mom? Either I just peed myself or my water broke." I ran into the house and up the stairs to the bathroom to make sure. There was no doubt. Immediately I started yelling for LoLo but he was downstairs in the basement playing a video game and couldn't hear me. I called his phone and he didn't answer so I just kept yelling until he finally heard me and came running. The first thing he said was, "Do I have time to take a shower?" Really LoLo? That's your concern? That question makes me laugh now but at the time...

I called the doctor and he said to take our time but to come to the hospital as soon as we were ready. LoLo took a shower, I finished packing my bag and the baby's, and we were on our way to the hospital.

We arrived around 7:15pm and were taken immediately to a labor and delivery room because all of the triage rooms were full. The room was huge. They checked me out and I was 1cm dilated. I wasn't having any contractions so they let me go down to the cafe to get some food, walk around my room, hang out with LoLo and my mom, and watch the Red Sox game. They told me that if my contractions didn't start by 10:30, they would start pitocin.

At 10:30, I hadn't had any contractions so they started the pitocin. I was so scared because I had heard that pitocin makes the contractions come hard and fast, but the contractions weren't too bad until the morning. By about 6:30am Saturday, I was 5cm dilated and the contractions were coming really strong. By this time, I was exhausted and almost crying with each one. It was definitely time for some pain medication. They gave me a temporary medicine that helped a little bit, but I knew I wanted the epidural. Around 8am, the anesthesiologists were able to come to my room.

I'm not ashamed at all to say that the epidural was a miracle drug. I went from almost crying to falling asleep and only feeling a little pressure from the contractions. By 9:30, I was already 7cm dilated. At 11, I was 9. By noon, I was fully dilated. When the doctors checked me then, they told me to let them know when I felt like I needed to push. That was the second time that I felt terrified. I even asked if I really had to push or if I could just stay the way I was. The doctor's answer was "Well, the only way you're going to get this baby out is if you push. It's not coming out on it's own!"

By 1:30 the nurse came back in and asked if I felt the need to push yet. When I said no, she said "Well, it's time!" It came instinctively to me. With each contraction, I would push 3 times for 10 seconds each. In between contractions, I was making jokes and laughing and chatting. I told you, the epidural was a miracle drug. I could feel just enough to know when to push, but all I felt was pressure. The nurse was amazing. To help me push, she twisted up a bed sheet and knotted each end. I held one end and she held the other. With each push, she had me play tug of war with her. In less than a half an hour, she told me it was almost time and she needed to get the doctor.

When the doctor came in, he made the same comment as everyone else who entered the room: "Wow! I can see the head and that baby has a ton of hair!" As I continued pushing, the doctor called over the medical student who was shadowing him that day. He told her, "Quick! Come here! You may never see this again. The baby is moving it's head to try to get out!"

When they finally pulled her out, the doctor brought her up to my chest to show us that she was a girl. At first, her umbilical cord was in the way and LoLo and I couldn't tell if she was a boy or a girl. But a few seconds later, it was obvious. We were both so excited. LoLo cut the cord and the nurses took her away to be checked out. As LoLo and I stared at each other in awe that we were parents of a beautiful little girl, we whispered to each other about the name. 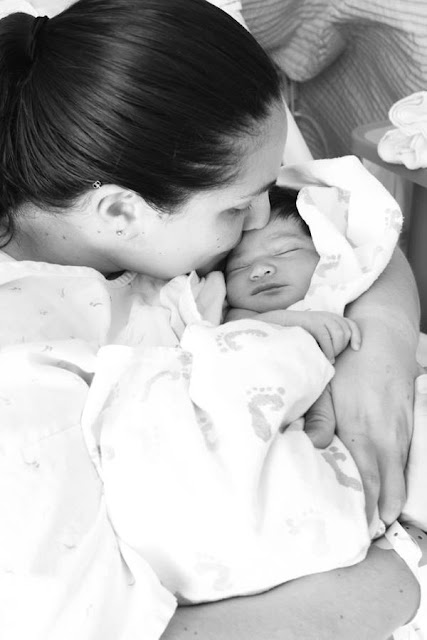 In my next post I'll tell you more about her name and the first few days of her precious little life.
Posted by Empirically Erin at 12:00 PM

Congratulations Erin!! She is just beautiful! Thank you for sharing your story!

Congratulations! What a beautiful baby and gorgeous name! I would be going crazy with hair bows with all that gorgeous hair!

ahh congrats!! love this story! so happy for you! she is gorgeous!

I can wait to see little Alexia. <3

She is definitely your child moving her head to help get out. And jokes between pushes...

I love it!! Thank you for sharing the birth story. Welcome, little Alexia! She is beautiful :)

I'm so jealous they let you get food! By the time I actually had the boys I hadn't eaten in 16 hours or something like that. I love that you shared these pictures, it almost makes me feel like I was there.

Congratulations girl!!! She's is BEAUTIFUL! Love that head full of hair. Your post made me smile. I remember not wanting to push either :-)

such a great story. when i wrote my birth story i was so glad i did. i'll treasure it forever...that's for sure! so glad i found your blog!

i write about my life and little gal (who will be one in a month!) over at http://farmerbell.blogspot.com

She is so precious.